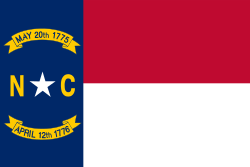 How To Locate An Inmate in North Carolina State Prison?

We Found a Total Of 520 Incarceration Facilities in The State Of North Carolina (NC):