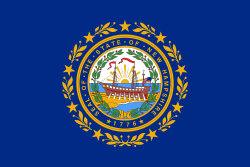 We Found a Total Of 133 Incarceration Facilities in The State Of New Hampshire (NH):